Would like to thank Doug Warden for his writing of the History and allowing me to put it up on the web site... You will be enlightened when you read it...

Click link below to open... When finished click the back button on browser ( upper left hand corner of page that has an arrow pointing to the left ) to return to Home Page... Enoy...

Attached is a document that I came across concerning the Battle of Quang Tri.  The battle started on January 31, 1968, the Tet Offensive.  It mentions several guys from C Company.  It is interesting to note that Rich Valles is mentioned as receiving an impact award of the Silver Star.  I’ve talked with him and he was not aware that he got anything for that battle.  He got it for crawling out, under fire, to rescue Tom Corey, who was severely wounded and keeping him alive until a medevac helicopter arrived.  Also, Billy Cabaniss and Paul Wachter were unaware that they got the ARCOM w/ V for that time period.

This 150 page book has the history of Charlie Company, along with illustrations and pictures, from October, 1963 to April, 1972.  Written and edited by Doug Warden and Michael Christy, it contains a wealth of information and memories.  Here are some comments on the book:

“I received my book a couple weeks ago, and I was pleasantly surprised on how professional and complete it is. You are to be commended for a great job—I know how much time you and Michael must have put into it. What a tribute to all the C Co guys who served. I’m sure they are thrilled as well.” 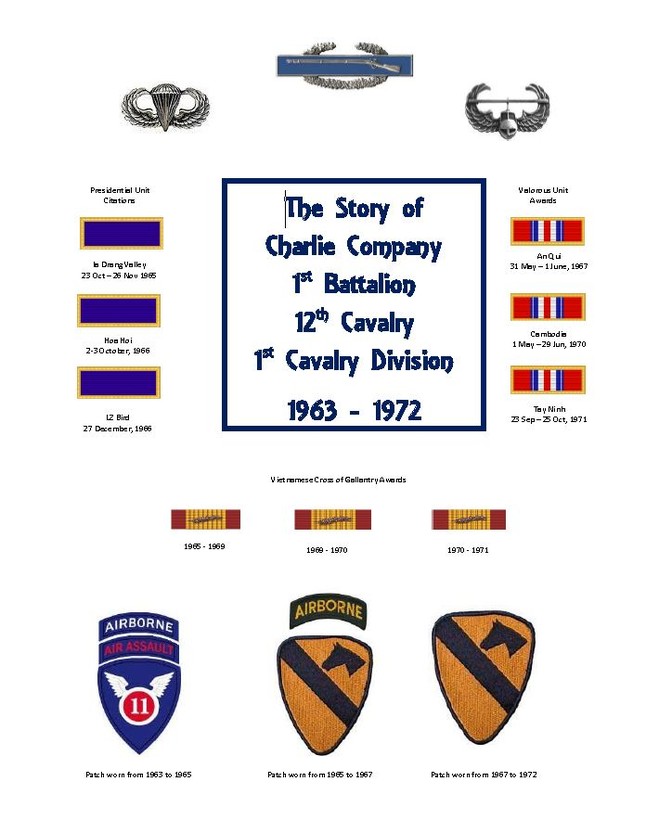 Ltc Mike Christy (ret) or as we called him Captain Christy, authored an article that appeared in Vietnam Maggazine... Click here to read the article about LZ Hereford   http://www.historynet.com/last-stand-at-lz-hereford.htm

Would like to thank Doug Warden for providing the following article about Perry Benally. Click here :  /000/2/6/6/22662/userfiles/file/Perry_Benally_Newspaper_Article.pdf